You may have heard the counterintuitive statistic explaining that people who have some excess body fat actually survive disease better than thin people. This is for two reasons. First they have more body to waste and the wasting effect of disease is often what allows an illness to overtake you. Second, heavy-set people (often refered to as endomorphic) often have and build muscle better than others.

Only a small percentage of the population is naturally small boned and inclined towards low body fat levels. This is because for most of evolution this would be a disastrous trait to have. The thinner you are the less muscle you tend to have and thus if you get hurt or sick your chances of survival are much lower than a bigger, huskier person. Plus you don’t store calories well enough to fight periods of starvation (which were common for 99% of our evolution).

In recent times thin body types have become the desired fashion and there has been a subsequent ‘anti body fat’ mentality. Certainly body fat levels influence overall health but something very important has been overlooked.

As we mentioned in a past blog post Doctors in several countries are now waking up to this issue and trying to encourage the medical system to make muscle mass a vital sign not just BMI and worrying only about body fat levels. (https://wefit.ca/2018/11/27/vital-signs/ ) 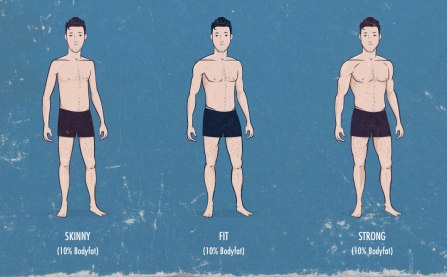 Looking good can be a reasonable motivation to stay healthy and fit but if it encourages frailty and a sluggish metabolism then it is completely counter-productive. Thus we will continue to preach week to week, month to month and year after year…